The jury 2019 has decided. For the 12 jurors of this year’s Kitzbühel Film Festival, an eventful week comes to an end, in which they watched 44 films in the categories feature, documentary and short film. On Saturday evening, finally, the long-awaited prizes in shape of a chamois forged by the blacksmith Sohler were awarded.

Moderator and Kitzbühel lover Arabella Kiesbauer led the numerous guests through this year’s FFKB award ceremony. Among the guests were Heino and Hannelore Kramm, who accompanied their friend and FFKB honorary winner 2019 Helmut Berger. Max von der Groeben with producer Alexandra Ortmair, did not also not miss this years’ Filmfestival and award ceremony. Among others, producer Eberhard Junkersdorf, Arno Ortmair and Martin Krug were delighted with this year’s winners.

FINALLY THE „CHAMOIS“ IN HANDS

In the category Best Feature Film 2019, the works “Dreamstate” and the Israeli film “Echo” were given honorable mentions in advance.
However, Gregor Schmidinger’s coming-of-age drama “Nevrland“ about 17-year-old Jakob, who is suffering from increasing anxiety disorders, then made the race. Lead actor and up-and-coming star Simon Frühwirth, as Jakob, embarks on a journey as he meets 26-year-old Kristjan in a sex-cam chat.

Producer Stefan Arndt read out the decision for Best Feature Film 2019, which is rewarded with a check of the MPLC (Motion Picture Licensing Company) over € 2.000: “Gregor Schmidingers powerful visual implementation is wild and sensitive at the same time, a report on spiritual chasms from that city, Freud also came from. Disarmingly raw, characterized by a young aesthetic that makes you want more. The Best Feature Film Award goes to NEVRLAND by Gregor Schmidinger. ” 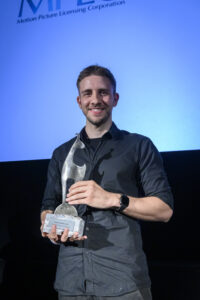 The documentary jury, consisting of Mijou Kovacs, Tommy Pridnig, Fred Breinersdorfer and Thomas Frickel, did not mind mentioning two films: “The Mens Room” by Petter Sommer and Jo Vemund Svendsen and Ben Asamoah’s film “Sakawa”.
In the hands then director Jan Prazak held the prize for the best documentary film 2019 for his portrait of an Irish recluse:
“We experience him without the film hurting his intimacy and without us as a viewer being put in the position of a voyeur. With sensitive questions, the filmmaker Jan Prazak succeeds in unlocking the protagonist and eliciting insights from his life that, in the context of the lonely Irish coastal landscape, have an impressive and lasting effect. ”

This year’s Short Film Award was presented by Franziska Benz to director Bogdan Muresanu for his film “The Christmas Gift“.

“This film has everything you need for a winning movie: clever script, political dimension, authentic features, perfect acting, a camera work that takes us along as a silent observer and has a pinch of black humor. ”

The FFKB Mountain Sportshort Award won the film “Now or Never” by Simon Platzer and Whiteroom Productions: “What many films only fulfill in individual areas, this project seamlessly combines: humor, cinematic images that make the athlete’s personality in the movie tangible, inspiration offer for the next generation of athletes and pure emotion when you finally reach the hard-earned goal. ” Juror Kim Strobl said.

The audience also chose his favorite. Asger K. Bartels received a beautiful watch from the jewelers Mühlbacher for his film “Dream State”. 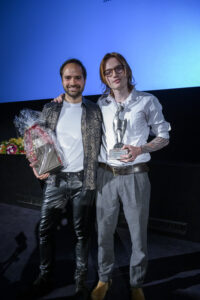 The association of the film festival Kitzbühel awarded Albin Wildner’s film “Der Wächter” for the Austrian Young Talent Award. “From the beginning to the visually overlapping end, we embark on „a tour de force“ with the magnificently played protagonist that does not lack any facet of human emotion. Experienced, rousing and sympathetic on all levels, this film has convinced us! 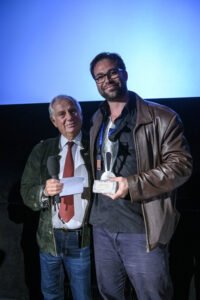 HELMUT BERGER WAS GIVEN THE FIRST AUSTRIAN PRIZE

Another highlight of the evening was the tribute of actor Helmut Berger, who received an Austrian prize for the first time. The laudator Helmut Werner led to his world successes such as “Ludwig II” or Luchino Visconti’s “The damned” and “witches of today”, who played here in the Gamsstadt. The award was presented by Mr. Max Märker, Managing Director of the company Evo Drink and the actor Antoine Monot Jr., who sponsored this year’s honorary prize.
Max Märker: “We are proud and glad that for the first time we are cooperation partners of the young and innovative Filmfestival Kitzbühel. And we are especially honored to present the honorary prize for a film icon like Helmut Berger. ” 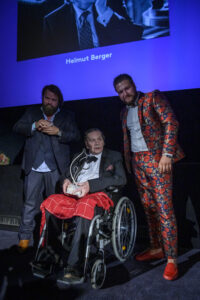 THE FURTHER HIGHLIGHTS OF THE FESTIVAL WEEK

On Wednesday, the jeweler Rüschenbeck invited to the AKI caviar and champagne tasting at the 7th Film Festival Kitzbühel. Afterwards, the cinema in the city took with the movie „Kaviar” by Elena Tikhonova, who won this year’s Best Austrian Director Award at the FFKB.

On Thursday, guests met “at Tomschy” on the Hahnenkamm for the traditional Directors & Producers brunch.
On lofty heights, the FFKB continued on Friday with the cinema on the mountain. Over 200 people found their way through the Alpine fog and were rewarded with an amusing evening with “Nimm du ihn” by Michael Hofmann. Leading actor Branko Samarovski was also enthusiastic about the event: “Actually, I do not like the public. But I really liked that! ”

Otto Schenk about the “Reigen” screening at FFKB

“I was touched to judge the film as if it were foreign to me. I am very critical and he has withstood my judgment. It’s nice to see that such films are still shown. That these jewels are still being dug up so they can still glitter. When the film festival does that, they make me very happy. I’m thrilled to ask a worthy old actor (Helmut Berger) about his world career, what it was like, and how it happens that you do not serve them anymore. Calling on me as a contemporary witness was a great honor to me. “

“Actually, I do not like the public. But I really liked that! “

“It’s very nice and a pleasure to host the Austrian premiere here.”

“A film festival with a heart”

“The Kitzbühel Film Festival and our Z44 – a two-tone at its finest.
The festival’s claim to conquer all our senses is in line with what we as Roner want to achieve with our Gin Z44.
A harmony of all our senses, coupled with the full enjoyment of authentic passion. Acting art and Gin Z44 – a perfect harmony. “

Please find all photos of the FFKB here.